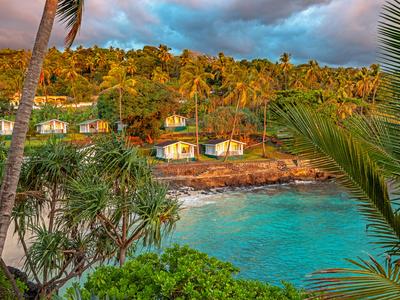 Voordelen: "The food!! The flight was in time and also the flight attendant were so available and caring"
Nadelen: "I have wifi in board for an hour for whatsapp messaging I would have beloved to have it all flight"

Nadelen: "The delay time was too much for no proper reason"

Voordelen: "I love the entertainment and frequent availability of food and drinks"
Nadelen: "The seats are too squished together. I was stuck next to a fat woman who kept shutting off my movies by hitting the controls of my arm chair"

Voordelen: "Your crew were great."

Voordelen: "Crew was very nice, very helpful"
Nadelen: "3 hour delay in flight from Chicago to Ethiopia due to ‘mechanical issues’ made me miss my connection. I was put up in a hotel, but woke up in the middle of the night to roaches all over the place. Not the best experience"

Voordelen: "The crew were ok but took ages to help you"
Nadelen: "faster service in the plane"

Voordelen: "Comfortable because the plane wasn't full."
Nadelen: "Check in and boarding was atrocious. We were told that we wouldn't be allowed to go to the gate if we didn't get through the check in but it wasn't our fault that it was taking so long. There weren't anywhere near enough staff and so by the time we managed to check in we had to go straight to the gate. Same thing when boarding. Took far too long and there was an inevitable delay with no apology. Plane ok. One toilet out of order so had to walk the length of the plane. Games no good without a handset and very few new movies."

Voordelen: "The staff was nice and helpful"
Nadelen: "We were so extremely delayed"

Voordelen: "Excellent airline overall Great seats for sleeping"
Nadelen: "Business class seats are not well appointed Nowhere to put a bottle of water - storage handbag and shoes etc could not be reached without undoing the seatbelt and screen far away from the seat Voice commentary was muffled and therefore unable to be heard"

Voordelen: "Seat layout-767 has only two seats across on the side sections, much better than three, which most planes have. Crew was courteous, captain explained reasons for delay. Plane was not crowded."
Nadelen: "Flight delayed two hours by weather. Ground operations seemed slow. All planes were delayed by weather, but ours took longer to get ready once weather cleared. Passengers were bussed to the plane for both boarding and disembarking while other planes used jet bridges."

Nadelen: "Rude flight attendants and desk staff that were not trained to do check in well. No entertainment available."

Voordelen: "Friendly crew"
Nadelen: "Good not that great - a suggestion - why not something like fresh bread (sandwiches) with cheese and tomato on it - bread often not so fresh"

Voordelen: "The food was amazing and the plane is more comfortable and you can relax."

Voordelen: "Crew members were friendly, movie selection was good, food was nice as well"
Nadelen: "When checking in I asked if I'd need to collect my bags and recheck them for another flight. I was assured theyd make it all the way to my destination and I wouldn't need to re-check it. He was wrong and now I'm trying to find my lost bag."

Voordelen: "Prior seating options, friendly air hostess, and vegan meal options."
Nadelen: "Flight from U.S had frequent meals, flight to Ghana had a sandwich and meal, and the time in between the two was extremely long, after been up extremely early to depart. It would also be awesome to have Ethiopian meal option, like injere"

Voordelen: "New plane."
Nadelen: "Addis airport is always a mess. Security check takes 30 mins+, gates are changed without announcements and there are no display mentioning flight or destination at the gate. For the flight, food not great and service slow."

Nadelen: "Please have a vegetarian option that does not contain cheese."

Voordelen: "Every thing include the crew members ."

Voordelen: "Staff was friendly. Airplane was clean, new and well maintained"
Nadelen: "The airport was disorganized. the boarding process was chaotic to say the least."

Voordelen: "Absolutely nothing"
Nadelen: "My flight was only for refugees and was delayed by 8 hours, however airport staff did not have it on their manifest, and Ethiopian never informed me of status. I just sat in the airport all night until I eventually got frustrated and went home. The airline had no idea I was in the airport and no Ethiopian staff were present to speak with. When I and my family called Ethiopian, they hung up on us, at least 6 times. This was my worst experience ever and I will never fly Ethiopian airlines again."

Voordelen: "The Ethiopians have got the transit sorted in Addis. I had a tight turnaround time of about an hour and 15 minutes. From alighting to boarding and takeoff was about 1 hour. Very impressed that my luggage made it as well."

Voordelen: "Impressive crew attendants and courteous ."
Nadelen: "Maybe landing was not too smooth"

Nadelen: "I was suppose to stay on the flight in Hong Kong to continue to Ethiopia and they never made an announcement. I had a seat with a TV that did not work and it took over 30 mins for a flight attendant to respond."

Voordelen: "Was a bit concerned because I only had a 45 min layover in Addis to change plans, howeve Ethiopian Air made sure we were met coming of the plane and facilitated a fast transit. Checked luggage also all made it through. I was pleasantly surprised. I flew Nairobi to Cape Town with connection in Addis."

Nadelen: "Lack of customer service. Due to the delay in Washington, we missed our connecting flight. Though the EA personnel knew of our delay and missed flight, we still had to wait in line at the counter for 3 hours in order for them to put us up in a hotel and make other arrangements. Though they had 15 hours to do this for us, they did not. They served some customers and did not serve others. There was no communication whatsoever, they just handed us papers without explaining what was happening."

Voordelen: "Seats were comfortable & some of the cabin crew were courteous"
Nadelen: "Flight delayed due to confusion at boarding gate, unprepared airport staff, wrong info on monitors. Again lack of food, forced to take whatever food they give you or you're told sorry, how can one side serve only fish while the other side chicken??? Vegetarians doomed as they don't get anything & are left without food! Major improvement required in food choices & availability! Our row of seats did not have volume on the tv monitors hence could not use!"

Voordelen: "Staff were pleasant"
Nadelen: "One segment of my flight did not have the gluten free meal I had requested ahead of time. Super crowded."

Voordelen: "The crew was very nice, beer on the flight is always a nice touch , plenty of food and beverages. Nice collection of movies and music. Food is OK. We had a 10 Hour connection at Addis Ababba, and we were provided with a city tour at the first time, and hotel at the second. I liked the Injira :)"
Nadelen: "Overall, it's kinda depressing to fly with Ethiopian, the whole experience, from the colors of the uniforms, to the big African people, there was not enough room to seat next to other person, we and some people we met on the flight experienced the same thing. Addis Ababba was very not welcoming, we had a small tour at the city, the people are aggressive, we heard a lot of "farengie" all the time - "foreigners", everything was very expensive, because tourist have a lot of money... they are not afraid to touch you, even at the face. if somebody offers you guiding, they will ask for money later on and will take you to expensive places."

Voordelen: "Plane from AA to tA seats very cramped and seats do not recline."

Nadelen: "Addis Airport is terribly organized and far too small for the volume of people they're pushing through it (which is probably the lead cause of the poor organization)."

Nadelen: "Addis airport is a disaster, Really long queues and badly organised, Our flight left 20 minutes late and in turn made our landing 1 hour later. The flight attendants on Ethiopian air are very lazy, they dont respond to the service button been pushed, and their English is not that good,"