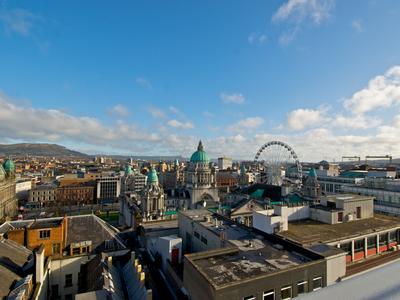 Voordelen: "Very friendly and responsive crew. Announcements from the Capitan and chief of flight attendants are very informative and comforting. Seat positions: very good leg room (even in economy)!"
Nadelen: "Newer airplane, as 747s are kind of outdated now, especially for long distance flights. But overall had good experience with KLM"

Voordelen: "Crew great, boarding at Nice very organised, boarding in Amsterdam not so organised!"
Nadelen: "A queuing system would be better-it was a bit disorganised at Amsterdam!"

Nadelen: "Flight 2 hours delayed, started boarding but had to wait on line 10 more minutes on boarding ramp for plane door to be opened, upon landing in Dublin had to wait on tarmac for anther 15 minutes for stairs to arrive and be connected to airplane. Then had to wait another hour for checked luggage...."

Voordelen: "Crew was very engaging and service was good."
Nadelen: "My seat was horrible. Right at the door, crammed, and no place to store my carry-on luggage."

Voordelen: "Crew was nice and friendly"
Nadelen: "Airplane so uncomfortable. Food horrible. Not even available for one of us what we ask for on what was offered. Bad taste and not what can be on a that length of time flight."

Nadelen: "The website I booked on and the Delta phone line on the printed ticket said that I had baggage when it turns out that I did not according to the check in staff and they made me pay."

Voordelen: "Seating is tight. The crew was great !"
Nadelen: "As we landed we had to wait on the plane for an hour and a half because another plane (Spirit) was in our “parking spot.” This made it very difficult for people and connecting flights."

Voordelen: "Entertainment was amazing! They even have four Harry Potter movies! We were told in advance that the flight was going to be delayed, which is really positive. Very friendly personnel."
Nadelen: "Food isn’t that great. Breakfast could be much better."

Nadelen: "I ordered Wheel chair for my parents but one of them didn't get it at all. When my parents were checking in for flight they asked the representative about meal selection and she didn't answer their questions properly and because of that my mom didn't get proper Hindu Vegetarian food on flight instead she got Egg omelet which she couldn't eat. She has to eat just fruits. My mother is a diabetic patient and she needs a food every after some time. I never had such a bad experience before with any other airlines."

Voordelen: "Gaps between seats are very narrow."
Nadelen: "when serving drinks, cabin crew limited to serve liquor only once and it was poor service."

Voordelen: "The crew was really friendly."
Nadelen: "There was a Force Majeur delay in Helsinki due to wings freezing that caused 20 minute delay to Amsterdam and made the interchange stressful."

Voordelen: "Short flight and being able to escape from drunk belligerent Passenger on previous flight"
Nadelen: "Nothing"

Voordelen: "Crew was very friendly. Nice that wine was served without charge."
Nadelen: "Announcements from the cockpit were hard to hear. Food has been better in past."

Voordelen: "Very attentive crew. Attended to needs immediately. Took a lot of time with each person when someone had something to say."
Nadelen: "The seat I had with no seats in front of me was very small. Much smaller than the other economy seats because the tray table and video screen were in the armrests. Paid extra for the legroom by ended up losing it side to side. Really had to squeeze into the seat."

Voordelen: "Crew was excellent -kind nice and very attentive"
Nadelen: "Entertainment went out mid flight. Had to be reset off 30 mins but cam back up"

Voordelen: "Seats were very comfortable, food was excellent, the staff was very nice, cabin was quite and roomy."
Nadelen: "No outlets to charge digital devices, and need more bathrooms on board. I was able to sleep most of the 11 hour flight so I did not take advantage of the entertainment."

Voordelen: "More than adequate room, And very good service from a very professional staff. Head and shoulders abovevany American carrier, and several European lines I have flown."
Nadelen: "Can't think of anything."

Voordelen: "Able to fly direct to ansterdam"
Nadelen: "Have to lay over on the way back. More expensive than other airlines."

Nadelen: "The boarding area was total chaos. In order to get to the gate I had to literally fight with the 100s of people who were waiting in the same area. No priority was given to family with children or elite members. Even when we complaint at the personnel we were told that “it was busy”. Usually KLM flight from Venice depart from the first floor where gates are bigger and you get straight with the finger to the airplane. Today it hasn’t been the case .... too poor service for a KLM fight"

Voordelen: "The aircraft was clean"
Nadelen: "The food was terrible, wifi was extremely expensive (Delta had free messaging over their wifi)"

Nadelen: "Flight was cancelled and we had to return to Amsterdam after du,ping fuel to make sure we could have a safe landing."

Voordelen: "nice crew"
Nadelen: "Boarding a plane this size at gate c21 ridiculous due to lack of space. Business class cabin is dated and seats not so comfortable. Food was mediocre at best."

Voordelen: "Very friendly crew"
Nadelen: "Flight got delayed. Would be nice if the crew would come around w water occasionally"

Voordelen: "Great to go through customs in Dublin so the landing at home is easy."
Nadelen: "The airline made people unnecessarily nervous by posting a very early boarding time so people thought they had to jump in line in customs when, in fact, we all had the same departure times and all had plenty of time."

Voordelen: "The price point."
Nadelen: "Service was terrible, staff was rude. For an international flight they provide you next to nothing. Only 1 meal and soda or water. They didn’t even have coffee or give napkins with the meal. The seats were smaller than usual and uncomfortable. In addition they lost our luggage."

Voordelen: "Nothing.....never made the flight....due to multiple flights delayed. My family and I had to be rerouted which caused us to miss our flight home from LAX."

Nadelen: "Over 90 minutes delayed. Plane was so hot it was uncomfortable"

Voordelen: "I liked service given for special needs older senior"
Nadelen: "Landed early in LAX and then had to wai about 20 minutes to get a gate!!"

Voordelen: "Comfort of seats"
Nadelen: "No service even water"

Voordelen: "Flight crew were super friendly and helpful."
Nadelen: "AerLingus representatives noted that my luggage would be shipped directly to Ottawa (Madrid-Dublin-Toronto-Ottawa) - this was false and caused significant pain in Toronto,"

Nadelen: "Dropped myself and my partner from our connecting flight from Heathrow to Boston cause of a plane switch. Provided no reason for why we were selected. Then was put on a flight to Dulles and then to Boston. Ended up arriving home about 5 and a half hours later than anticipated due to BA's incompetence. Awful day of travel. Also the plane's temperature was HOT! I've never experienced such discomfort on a flight."

Voordelen: "The crew was very pleasant. The food was actually good! The flight was exactly on time! And they didn’t loose my luggage! It was perfect"

Voordelen: "The flight was short."
Nadelen: "I am 6ft 2ins. and the legroom was awful. My knee still hurts. The staff was not very friendly. It’s amazing that flight attendants don’t realize that they work for the passengers and not vice versa."

Voordelen: "Staff was friendly."
Nadelen: "It would be nice if they offered coffee or tea or water for free. At least come around with a tray of water."

Voordelen: "Boarding and on time schedule"
Nadelen: "Seats, food and not enough beverages"

Nadelen: "Because there was a delay in getting to our connection our luggage was not delivered. It didn't make it to our hotel until the next day."

Nadelen: "the food was really expensive"

Nadelen: "Passengers line up to board instead of waiting for their number rows to be called. I ended up boarding later than most and the overhead lockers of the front rows (where I was sitting) were completely full. I had to place my baggage very far back and wait for almost everyone to leave the plane so I could collect it."

Nadelen: "Most uncomfortable flight ever"

Voordelen: "no delays, comfortable seats"
Nadelen: "The flight attendants went right past us never asking if we wanted anything. They served the people to our right and in front of us. Mystifying."

Voordelen: "Average flight"
Nadelen: "Not enough legroom I felt like a sardine"

Voordelen: "I loved that the trip was relatively short and uneventful. The food was adequate, but nothing to brag about and very little. The hostesses were nice,better than last time. The price was right on, mostly for a trip of under 15 hours...when usually it is 20h with a stopover."
Nadelen: "On the way over, I couldnt get water. The trolley didn't come by, and I had to "leg-over" my sleeping neighbor to get a glass of water fo the back reserve. The TV wasn't working; the remote was dead. As it was a night flight, it didn't matter tt much for me, but it should've been working. The passengers could have been spread out better as there were completely empty middle rows. It would have helped with comfort."

Voordelen: "Crew was responsive and kind if something was requested but service without asking is no longer part of a transatlantic experience."
Nadelen: "If you're on the Airbus transatlantic flight, the last section nis so noisy I'm surprised it's even a legal noise level. You can't even hear the entertainment it's so loud. Had to buy an upgraded economy just to be able to endure the long flight. It would be nice to see the cart come through again for coffee refill service."

Voordelen: "Nothing extraordinary about the flight (not necessarily a bad thing). Complimentary refreshments."

Voordelen: "Much roomier than other airlines."
Nadelen: "One Staff member was in a very bad mood and didn't bother hiding it. The others tried to compensate for her. The arm rest do not go all the way up."

Voordelen: "clearing customs in Dublin rather than US was nice. Since we chose the flight based on price, It's reasonable to expect some corner cutting."
Nadelen: "Aer Lingus operated the flight. Haphazzard ticketing/check-in procedure would have been stressful if it wasn't clear that everyone else on the plane was there in line too. Both legs of our trip with Aer Lingus were on older planes, that had obviously flown a lot of miles. Sound on my seat console on this flight was so bad that it was unusable."

Voordelen: "The staff were very sweet and courteous love the Irish accent"
Nadelen: "The seats"

Voordelen: "The seats were comfortable, the crew was friendly and the food was okay."
Nadelen: "The entertainment system wasn't great. The earphones quality was quite bad and felt really uncomfortable. Unfortunately, AerLingus still has that double pronged plugs and I wasn't able to use my personal set (actually, I could but sound would only work on one side). I'll definitely fly with them again, only next time I'll bring an attachment for me to be able to use my headphones."

Voordelen: "I had the whole row to myself so I was able to catch up on my sleep which was nice. The"

Nadelen: "Cheap headphones given out for the movies, almost impossible to hear speech"

Nadelen: "It's Ryanair. So, no further comments required..."